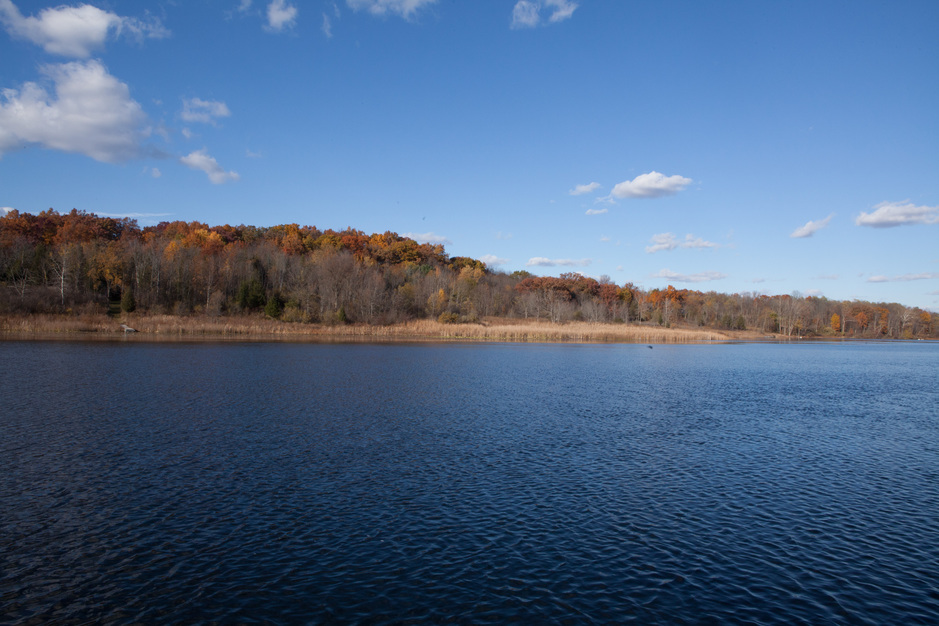 HISTORY AND FACTS ABOUT ASHKAY ISLAND AND IRON MILL POND

Iron Mill Pond is located in the Southwestern corner of Washtenaw County. The lake is actually made up of 5 lakes including Iron and Crane Lakes. The Iron Creek Dam was built to create a saw mill the surrounding areas around the lakes flooded and created one big pond. The size of the lake is 151 acres and includes the 8 acre island at the western end. The original lakes make up the deep parts of the pond and the maximum depth is 42 ft. Water enters the lake from the south under Wolf Road.

Once the saw mill was no longer in operation the dam was replaced with a culvert to control the lake level. The lake water enters the southern shore from the creek keeping the water level fairly constant. The water quality is excellent since the water is constantly moving through the lake. The water in the lake flushes rapidly and completely changes over every 2 months. The water is clear with visibility of 10 feet being common. The water exits the culvert, is ducted under Sharon Hollow road and continues as Iron Creek flowing to the East.

The lake once hosted a campground on the peninsula on the eastern end of the lake. On weekends it was common to see upwards of 20 plus fishing boats.

The lake is home to wildlife including birds, turtles, frogs, and fish. Deer are commonly seen on the Northern and Western shore and have been known to swim to AshKay Island. Eagles have been spotted and the island is home to a resident Osprey in the fall as it makes its way south for the winter.

The lake has approximately 20 cottages, mostly on the southern shore of the lake. These residents are part time vacation homes and a few full time residents. The lake does not have a public access point, it is considered private.

AshKay Island was a high hill before the dam was installed and became an island when the lakes were flooded. The island is made up of sand and numerous varieties of hardwood trees. The Elm trees on the island survived the Dutch Elm disease. Other common varieties are Tulip, Oak, Maple, and Hickory. The rolling hills on the island offer sanctuary to rabbits, squirrels, raccoons, and chipmunks. The island was selectively cut in the 1980’s, and the tree tops and stumps still remain today.